I haven't had a chance to hang out alone very often with Solomon since Nalah has been born and Ben started a new job working out of town. Sollie loves his baby sister very much but Nalah is the kind of baby that likes to be held all the time and has to be part of the action and do what ever anyone else is doing so this really limits what I can do with him. His sisters are a lot more demanding of attention than he is so he has starting acting out in naughty ways to get attention. I feel badly that I am not able to spend time with all of my kids individually and with Papa gone until the weekends and a new baby it has been something I am struggling with. So I really wanted to have a date with my sweet boy, and just my sweet boy.
After buying some blueberries from the neighbor girl who had a little stand on the corner he has been asking for more so I asked him if he would like to go pick his own blueberries and visit some of our favorite farm animals. He was pretty excited about that so Saturday afternoon we headed out to Sauvies Island to do some picking. It was super hot and I thought the sunscreen was in the car when it was not so we didn't pick for very long. Most of the blueberries are not quite ready yet as you can see by the pictures they are still pretty white. We ended up only picking two pints but we still had a fun time together and we are thinking of maybe going back in a week or two so we can really stock up. While we were picking I heard several people including a woman in her later years mention that she had never seen a blueberry bush before. It was my first time picking blueberries too and I was feeling badly that I had gone 31 years and had never picked a blueberry before, but apparently I am not the only one. One of the  most wonderful joys of life that we all take for granted most of the time is the potential discovery of learning new things every single day :) 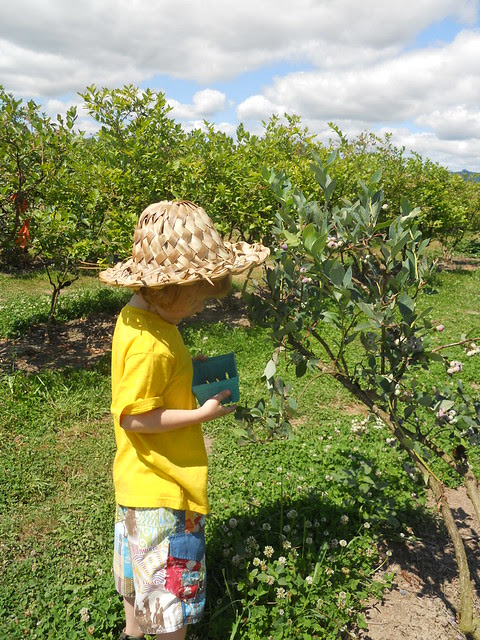 yay! glad you guys got to have a "date"! When we went last week there were tons of ripe blues, so I guess those must have all gotten picked! I would love to go back with you guys when you go again. We picked 4.2 pounds and ate them within a week!