I celebrated my Birthday with some friends this past Friday night. It was also national margarita day so we had to celebrate that too ;). I reunited with a friend I had not seen in almost 10 years. We ran into each other at a concert a few weeks ago and joked about celebrating our birthdays together watching  a funk band we used to go see often when we first moved into Portland many years ago. Well after looking into it (thank you Google)I found that they still played out and had a gig the Friday before my birthday at the same bar we used to see them at. Too perfect. So we met up there along with some other good friends and had a great time dancing to funk all night long. The band even sang Happy Birthday to us and played a Stevie Wonder song for me. There was also an Eddie Vedder doppelganger that had us all laughing like crazy.  It was a great time, It has been a very long time since I went out and celebrated my Birthday, they have been pretty uneventful in the past few years. Last year I was huge overdue pregnant on my birthday and all I though about was having a baby. SO happy to have her on the outside this year.
Originally I wanted to head out to the ocean on my Birthday but I heard though the grapevine the weather was going to be super wet and windy with snow in the mountains so we decided to put our coast trip on hold for a calmer day. Nice weather would be a lot more fun for the kids although I would be perfectly happy agate hunting in the pouring rain.
So instead we decided to stick around the city on Saturday. We watched Solomon enjoy his first baseball class in the morning.It was adorable. They learned how to run the bases and practiced catching and throwing, at the end of class they each took a turn at bat and Solomon hit the first pitch. Nothing cuter than little kids playing sports together.
Then we went out to a thrift store called Rerun that I had always wanted to stop at, but it never seemed like a good time. I felt like I was in a Portlandia episode as the check out guy had a handlebar moustache and was juggling. I found a pair of walking shoes for super cheap something I have needed for a long time, great birthday thrift score. Then we headed out to the Arboretum in Washington Park for a little hike, the sun came out and the lighting was beautiful and I got a chance to try out my new(to me) shoes. We had planned on going out to eat that evening, but we were all pretty pooped out by the time we got home and going out to eat on a Saturday at my kids bedtime sounded more stressful than fun so we got Chinese take out instead and Ben brought home a super huge brownie desert for us to share. So we had a quiet night a home, a perfect compliment to the night before :)

Signs of spring are everywhere, crocuses, sunny puddle walks, bike rides and fun times at the park.
Today is 61* and sunny, I'll take it!
We are supposed to get rain this weekend so I am soaking up as much sun as I can.
Here is to spring!
Posted by Heidi at 3:42 PM 2 comments

Goobie Rue is celebrating her first Valentines today. The last of the first holidays for her as she will be one next month!
If it's your first or your 101st, Happy Valentine's Day!
Posted by Heidi at 1:15 PM 1 comments

Well, I am a day late posting this but Nalah is 11 months old!!
yay!
Where does the time go?
I finally got a baby who likes to swing!

She also has been saying several new words, like: thank you(ang oo), oh oh, bye bye, gentle(dentow),woof woof,brother(bwow),sister(tehtur).
She loves funk music and kitties... I think we just found her Birthday Party theme for next month :)
We love you so much Baby Goose!

Hello friends! Just wanted to mention that the Love Dragons are back in my Etsy shop just in time for Valentine's Day. This fun costume makes a great gift and is a fun part of any dress up collection.
There is still time to get your dragon tail in time for Valentines Day! 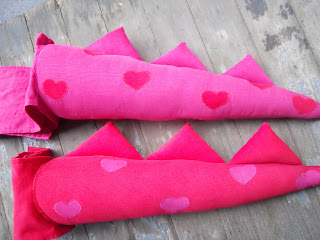 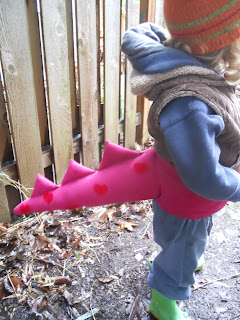 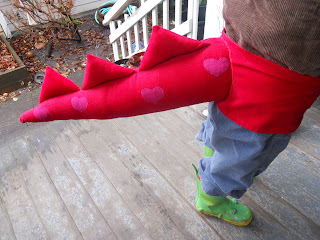