Yarn Along: Hats,Hats,Hats and a Belated Yarn Crawl Recap 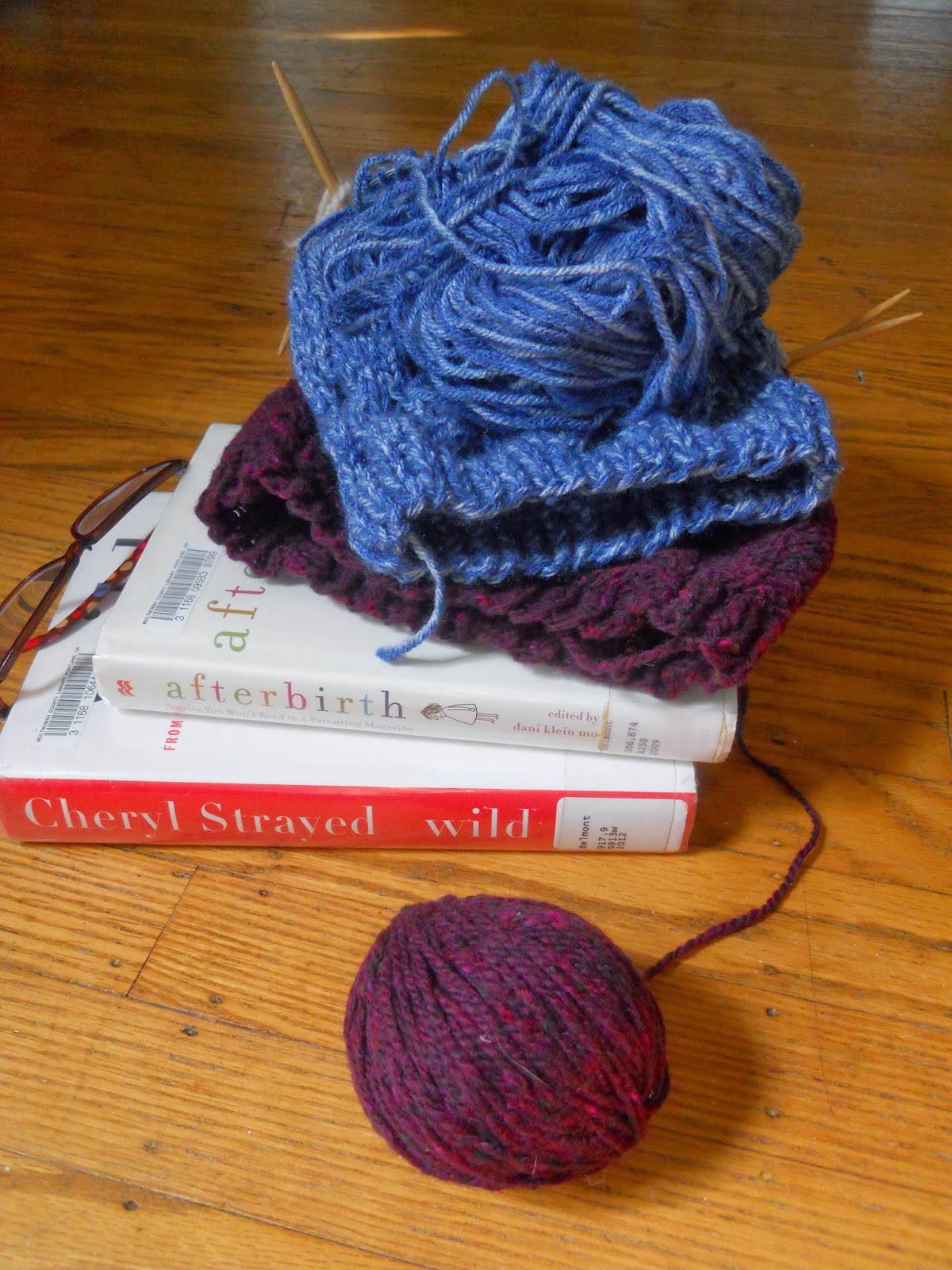 I have been on a hat kick lately I guess. I just finished a Star Crossed Slouchy Beret for my oldest daughters Birthday (13!). She picked out the yarn and the pattern. It was fun and fast and super easy cable pattern after working on this doozy.... 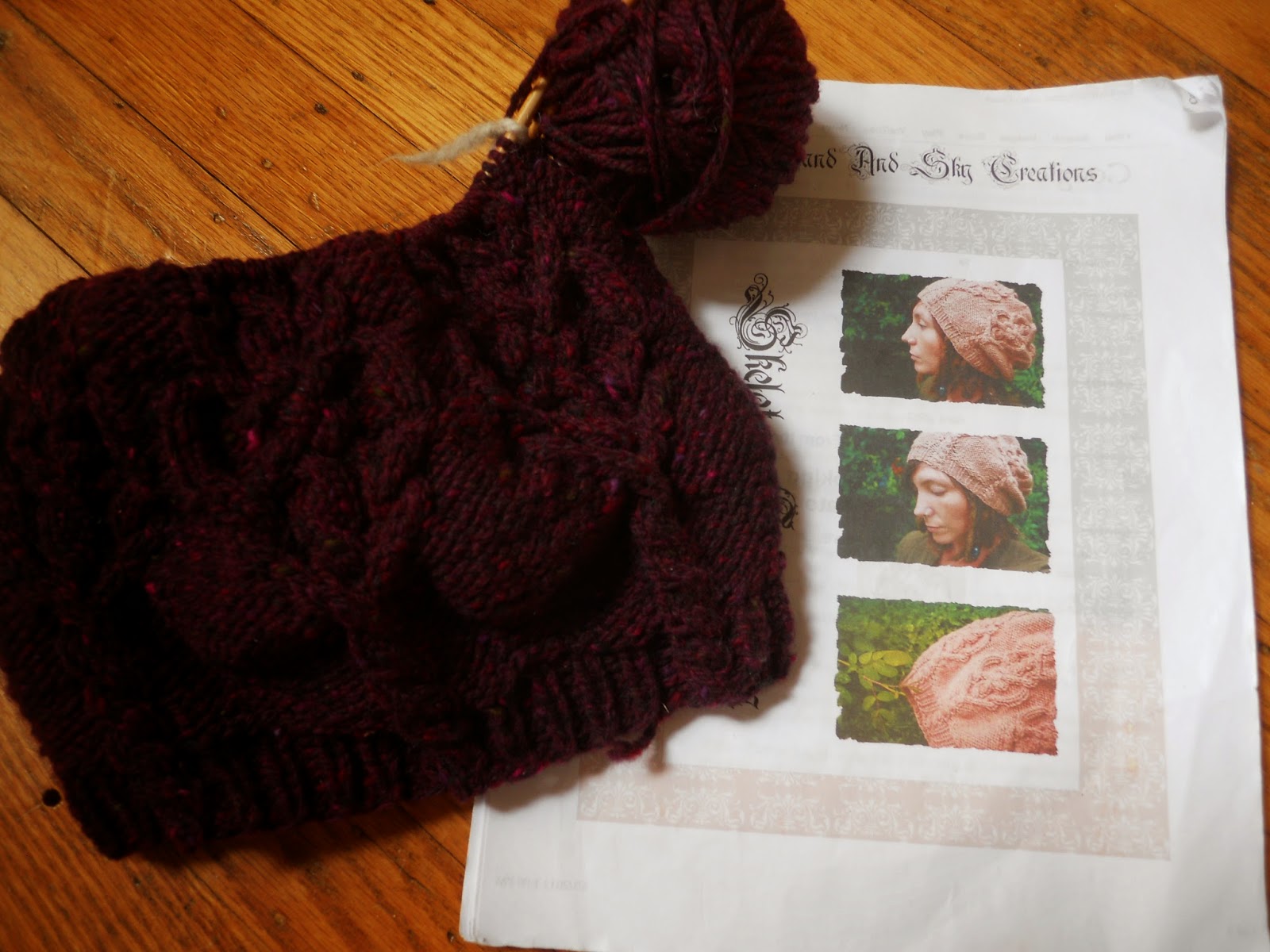 This is my Skeleton Key Tam that I have been working on like crazy, enough to wear a hole in my finger from the cable needle..ouch. That was a lot of crazy cabling. I love the design but it was turning out a bit small and I didn't notice until 70% through the pattern that I was knitting on size 6 needles and was supposed to use a 9! Oops! So I  am feeling frustrated and not sure if I am going to frog it or just finish it and give it to one of my girls. I do think the pattern would show up better in a lighter color, This was not the yarn I purchased to make the hat originally I planned to use a light blue tweed until I realized I had way less yardage than needed. 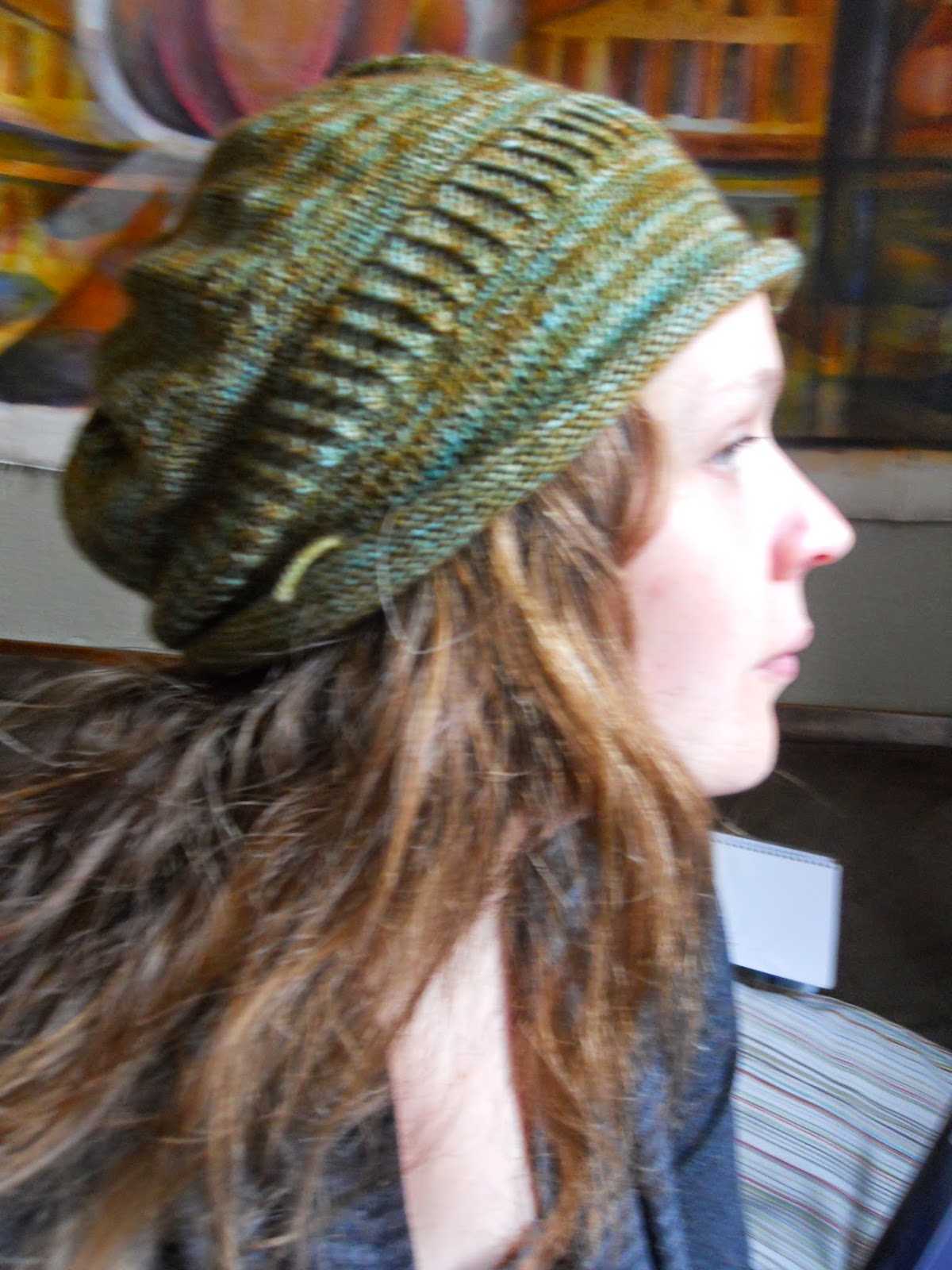 I finished my second Blume Hat. As you can see I still need to weave in the ends( and bush my hair...geesh). I was wondering why it look different than the last so I reread the pattern and noticed I forgot to pick up stitches along the brim that creates the petal look of the hat. I actually kind of like it better without it so I am just wearing it around as is for know. I can always go back and knit the brim. It was hard enough for me to re knit the hat in the first place after the first one was a pain in the butt took forever but I loved it when it was done, but sadly lost it. This is my replacement, hopefully I can hold onto this one because I doubt I will have the patience to knit it ever again. It is a simple pattern but the tiny needles and sock weight yarn drove me nuts. 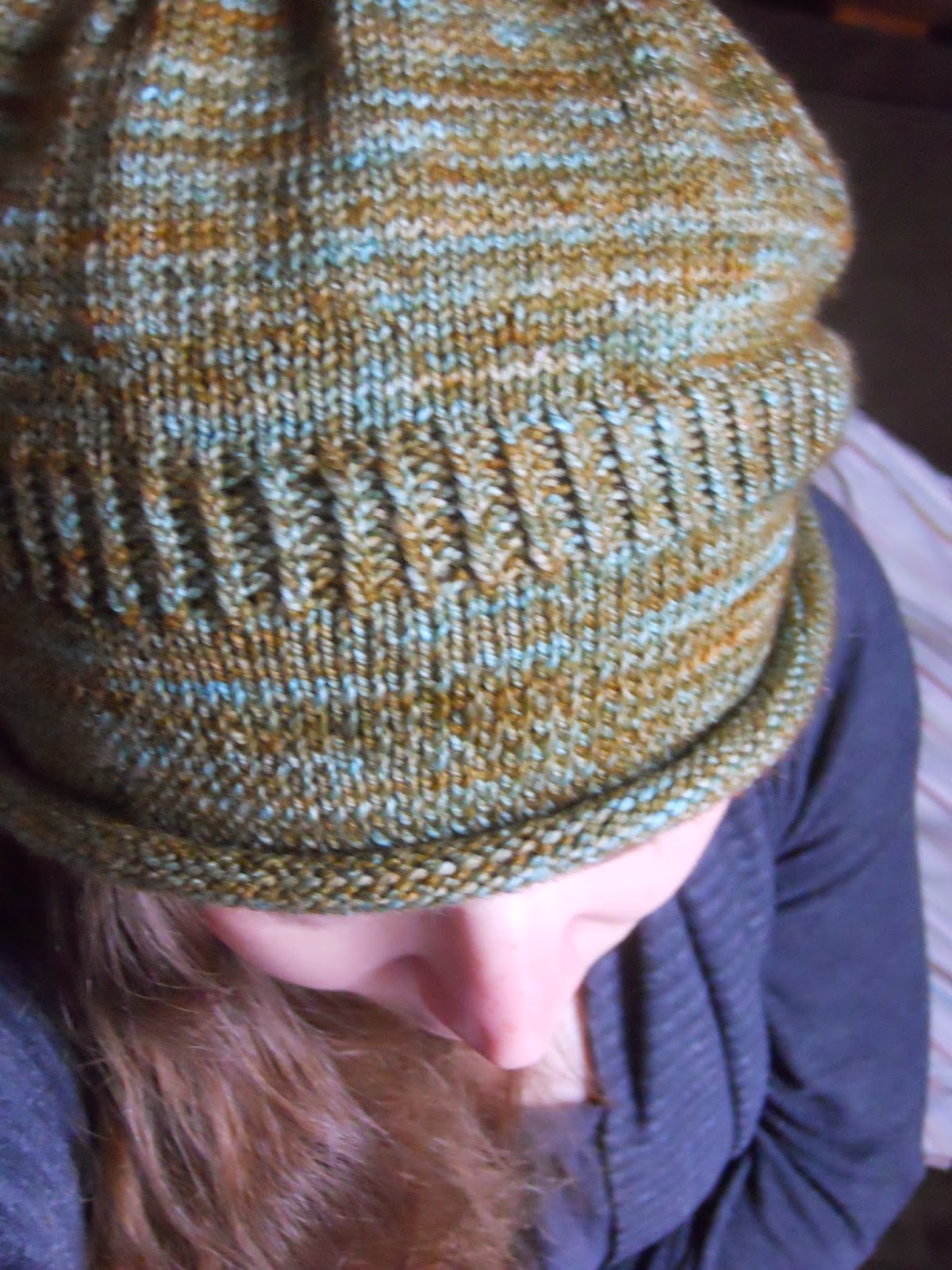 A few weeks back was Portland's Rose City Yarn Crawl. It is a fun event that links all the local yarns shops together for a four days of sales and raffles. Each store you read you sign in for the raffle to win a huge basket of yarn for each store and get your "passport" stamped. This was the first year I actually went to all of the shops. It was exhausting honestly. The worst part was driving in the SW suburbs that I am pretty unfamiliar with...tons of twisting interstates and highways, and traffic in the suburbs is so much worse than in my S.E. Portland neighborhood. I wish I had GPS or a smartphone, it would have been so much easier. I don't know how some of these ladies would hit them all in one day, I spread mine out over 4 days and was still exhausted...and I am about half the age of most of the Yarn Crawlers. I am glad I did it but I think next year I will stick to the stores within the City limits. One shop in particular towards the very end of my Crawl called the Dublin Bay Knitting Company was particularly cozy. It was pouring down rain outside and dark and dreary, and the shop was so warm and cozy with a fireplace with cookies and tea spread out on a small table surrounded by comfy couches and Downton Abbey was playing on a flat screen t.v on the wall. Sigh, a little bit of heaven. 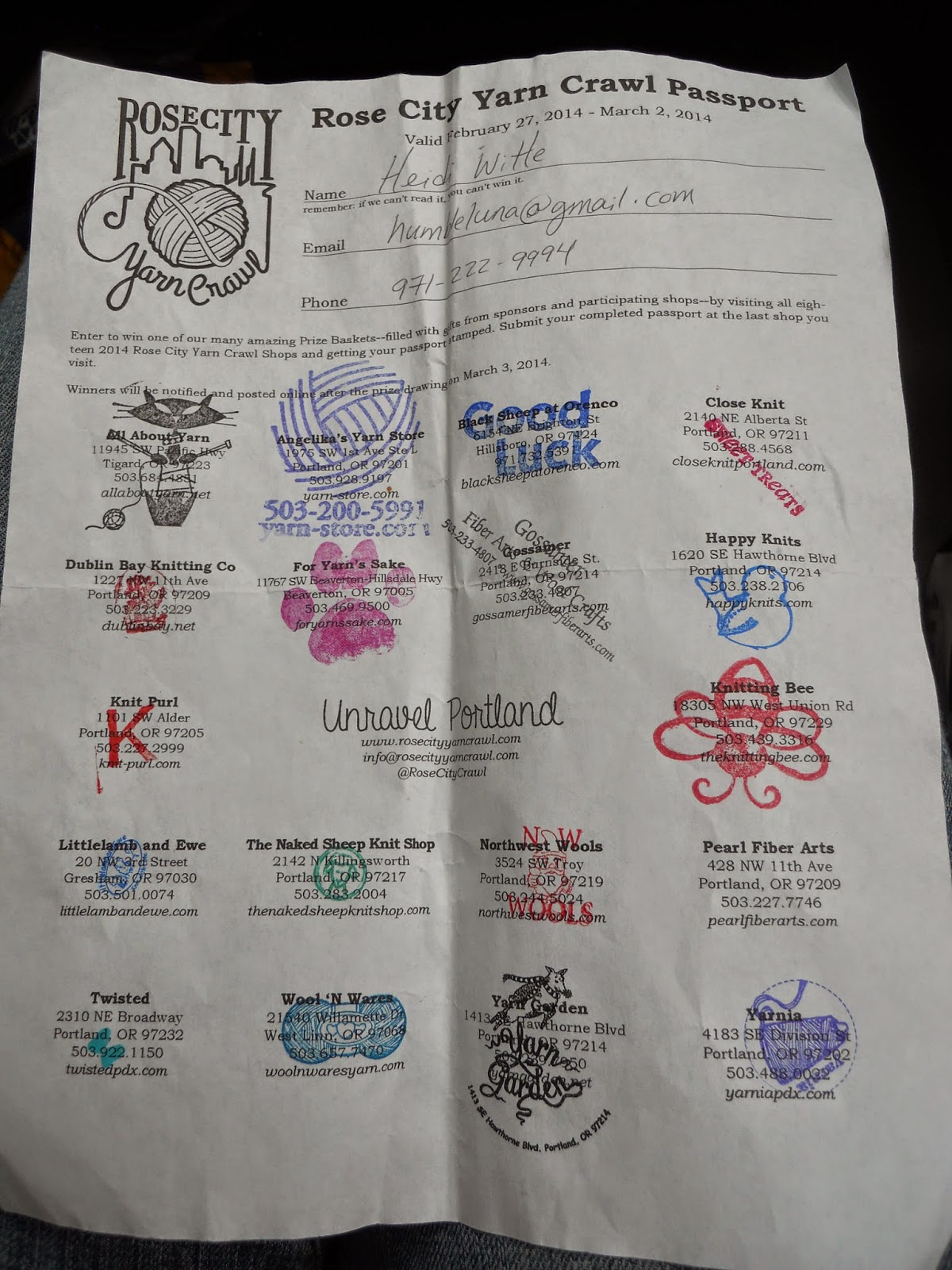 Here is my passport before I handed it in at my last stop! 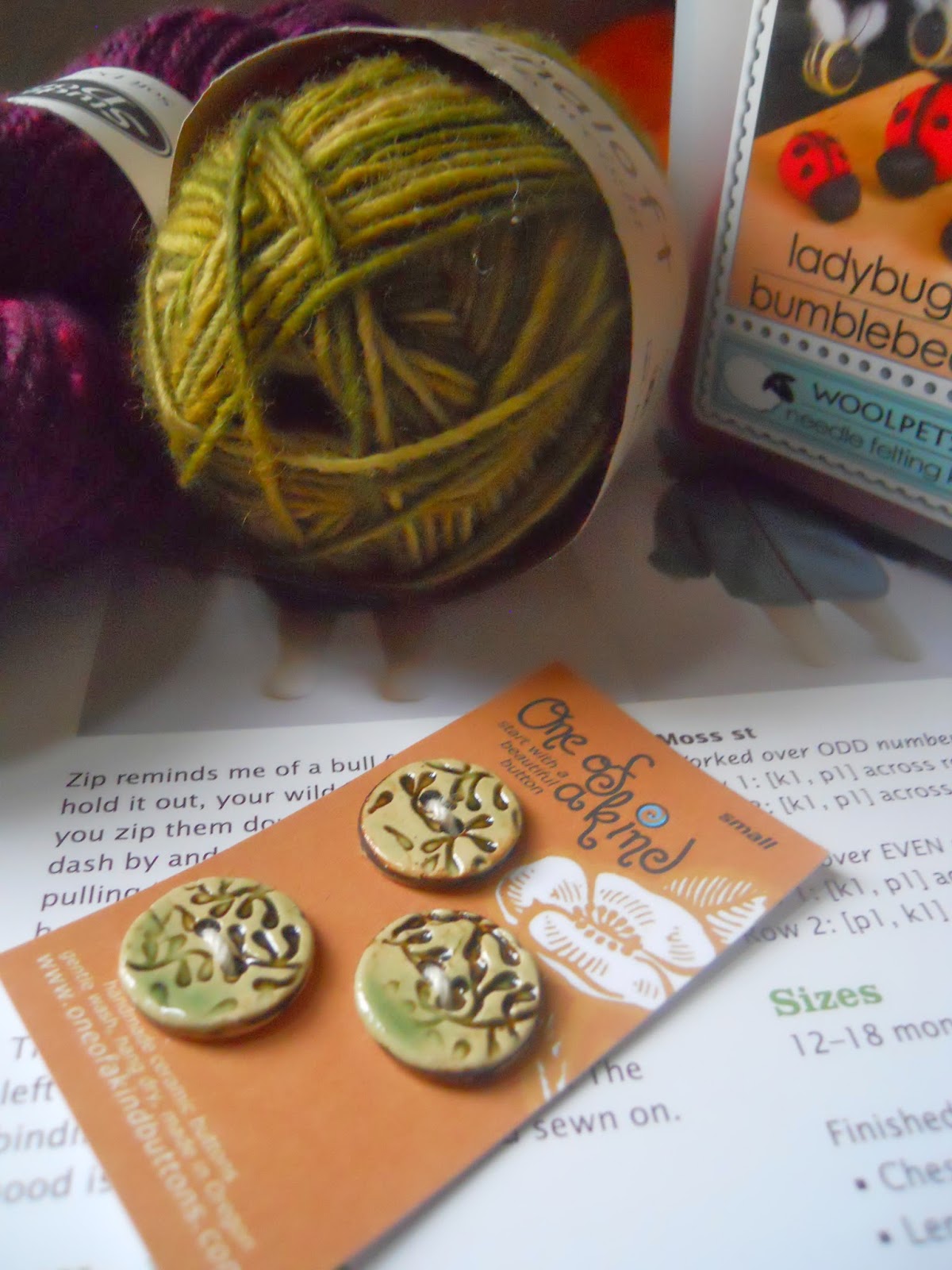 These are my goodies that I got along the way. I am lucky to have the Yarn Crawl right after my Birthday ever year so I have a little spending money to treat myself.  I got two skeins of yarn, a needle felting kit, some beautiful ceramic buttons made by a local artist, and a bunch of patterns that were 3 for 5 dollars(score!) I got several patterns by Coco Knits that I have had my eye on for years. The one pattern you can see is called Zip and I wanted to make it for my son about 5 years ago. I guess I am getting another chance to knit it for Nalah while she is still small.


I am currently reading Afterbirth:Stories You Won't Read in a Parenting Magazine a collection of parenting tales by various writers. I just spotted it at the library one day and thought it looked like a fun read. As I am home alone with three kids five days a week I need to keep my sense of humor about parenting as much as I can.
I also finally got my hands on Wild by Cheryl Strayed a local author.  I have only just begun but it is quite the tale, The first few chapters have already broken my heart.

Wow knitting friends, thanks for reading through that monster of a post! Please follow along with Ginny at Small Things to see what other blog friends are knitting and reading and to share yours as well.
Posted by Heidi at 12:20 PM

Loving your hats!
I wish I had a yarn crawl close to me. I don't know I could be as restrained as you though.
Have a wonderful week.

I think I like your new hat as it is too! So glad you finished it. Seems like you got it done pretty fast