Booby prize and a peacock....

A few months ago a local Portland yarn store called Twisted had a little contest to name their Blue Footed Booby that was knit from a pattern called "Feathers" By Knitting at Knoon. I wrote in with the name suggestion of "Indigo Montoya" inspired by Inigo Montoya from the movie Princess Bride. I got an e-mail a few weeks ago that they voted and my name won by a landslide. I won a copy of the pattern "Feathers" along with a cute crocheted cake key chain by Lantern Moon. 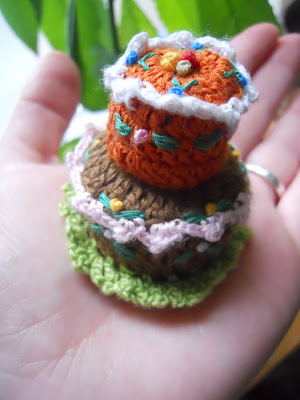 One of the patterns in "feathers" was a peacock. When we first moved to Portland back in 2003 I was talking to my Dad on the phone telling him all about the city and how we had roses in our yard in January when a giant bird head peeked into the window of our upstairs apartment where I was sitting and nearly gave me a heart attack. My next words were "Dad, there is a peacock on my roof!" I think he thought I moved to some tropical paradise which it kind of was compared to near Buffalo New York where Ben,Sophie and I were moving from and Wisconsin where I grew up as a child. The Peacock lived on our roof for about a week. I have no idea where he came from or who he belonged to. I thought since so many Portland people had chickens running around in their yards that Peacocks were just part of the norm too. Keep Portland Weird!
So I just had to knit one. The pattern was a bit finicky and I ripped the body out completely twice due to funkiness in the neck. Third times a charm or, well , good enough at least. Oh I love your peacock!
And I love Inigo Montoya and his new feather namesake!

Mine will be next! Then our peacocks can be buddies..

What a fun post, congrats on winning the name contest, I love it!! And from a fantastic movie too. I am so happy to hear of your continued love of Portland. We are actually coming to visit again in September. I am on a big campaign to convince hubs that it is where we want to be (or Seattle, but I think I lean to Portland). I show him your posts all the time too :). Wish me luck!!

Such awesomeness here! Woohoo on the name contest.
Seriously, your peacock is amazing.